SYRACUSE, N.Y. — Ben Walsh’s path to the ballot took another turn Monday as he found a backer for his independent bid for mayor.

Babinec ran for Congress last year in the 22nd district, which covers Utica, Binghamton and parts of Oswego County. He lost that race to Republican Claudia Tenney.

As an independent, Walsh has sought multiple avenues to the ballot in November, including discussions with Republicans, Libertarians and the Reform Party. The Reform Party — Onondaga County’s smallest party — endorsed him, securing one spot on the ballot.

The Upstate Jobs Party doesn’t automatically give ballot access. Walsh will still need to collect 1,349 petition signatures from city voters, only he will do it under the Upstate Jobs name instead of something he creates.

“We could have created our own party, maybe the ‘Ben Walsh is Awesome’ party,” Walsh quipped. “…The value of the endorsement is the platform, the message, the network of people like Martin who have a track record of creating jobs.” 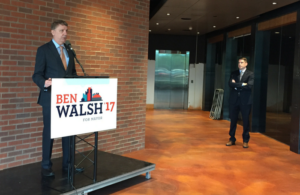 The party provides a platform and some logistical support, but little else. Walsh’s campaign team will still be responsible for collecting signatures and raising money.

For the budding Upstate Jobs Party, Walsh provides a high-profile candidate in the state’s fifth largest city. The party’s infrastructure and support does not yet reach to Syracuse.

Babinec said he is exploring candidates in other parts of the state as well.

“We have built a very strong following,” Babinec said. “This is a way to keep moving that forward and build our credibility, and especially, line up with candidates that embrace the principles we know are really important.”

The party is dedicated to economic development and job creation, both of which Walsh has focused on during his campaign.

Babinec said he is working to secure a permanent ballot line next year for his party. That requires a candidate for governor who can meet a certain threshold of support. It’s too early to determine who that candidate might be, Babinec said, and he laughed at the suggestion that he could run. 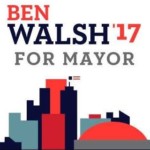 NEXT -> Learn more about Ben Walsh, an independent candidate running for Syracuse Mayor in 2017.